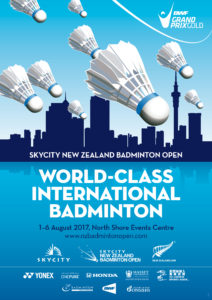 Tickets are on-sale through Event Finder and are selling fast, the link to ticket sales is below:

The 2017 SKYCITY New Zealand Badminton Open has today announced a stellar field across all disciplines of singles, doubles and mixed doubles, headlined by one of the absolute stars of the sport in world number two men’s singles player, Lee Chong Wei (Malaysia).

Originally scheduled for march this year but delayed due to the Adele live concerts coming to Auckland at that time, the August 1-6 tournament at the North Shore Events Centre is a BWF Gold Grand Prix event, but has again punched well above its weight with the quality and depth of the players coming to New Zealand from 18 countries – many of them powerhouses in the world of badminton.

The jewel in the crown is without question the appearance of Lee Chong Wei. The 34-year-old is a four time All England champion, three time Olympic and World Championship silver medalist and has won his home Malaysian Open an incredible 11 times in an illustrious career that shows no sign of slowing.

Event Director Julie Carrel has been trying for some years to secure the signature of Lee Chong Wei and is delighted to have him leading such a world class field across the week.

“The quality of all of our events is just amazing and is again a step up on last year, badminton fans are going to be treated to an incredible week of world class play.

“Lee Chong Wei is an absolute rock star of our sport, he will bring a great deal of attention and further international coverage to what is already perceived as a great tournament. He is a former number one in the world and is clearly intent on returning to the top spot and will be the obvious favourite in the men’s singles.”

SKYCITY Chief Operating Officer John Mortensen says SKYCITY is looking forward to being involved in the competition for the fifth year.

“Supporting this event has become an exciting event highlight for us. This will be the fifth year that we have been supporting the SKYCITY New Zealand Badminton Open, which gives us the opportunity to host so many international players and visitors and show them a bit of what New Zealand has to offer.”

“The growth of the sport is particularly great to see, as it is a huge reflection of the traction and following this sport has gained in Auckland,” continues Mr Mortensen.

Lee Chong Wei is not the only former number one in the world to sign up for Auckland however, with Thailand’s Intanon Ratchanok set to light up the North Shore Events Centre with her all court game. Currently number eight in the world, the 22-year-old is one of the rising stars of the sport and is a three-time former Junior World Champion and 2013 open World Champion.

Indonesia is sending a youthful 54-strong team, with the next three highest ranked women all from the Asian powerhouse. Led by 18-year-old Fitriani Fitriani (21 ranked), Hanna Ramadini (34) and Dinar Dyah Ayustine (41) will bring an excitement to the tournament and delight ex-pats living in New Zealand.

The men’s singles sees seven players ranked inside the top 30 in the world. India’s Ajay Jayaram (15) and HS Prannoy (21) will be amongst those to push Lee Chong Wei; both were part of the India team that won bronze at the 2016 Asia Team Championships.

2014 SKYCITY New Zealand Open winner Tzu Wei Wang (TPE) is ranked 18 in the world, while two-time Auckland runner up Jen Hao Hsu (TPE) is always a crowd favourite and at 29 in the world carries good form into the 2017 edition.

Carrel says the change in scheduling for the tournament has had little effect on the quality of the entry list, suggesting that years of hard work is paying off.
“The BWF has been very supportive throughout, as have SKYCITY and all of our sponsors and stakeholders. And the move has not had an adverse effect on us at all, the tournament is recognized the world over as one of the leading Gold Status Grand Prix events and has again been supported superbly by many of the leading nations throughout Asia.”

With the entry list released by the BWF, the next step will be to announce seeds across all events, this will be done by the BWF and released on Friday July 7.

Others to watch at the Gold Status Grand Prix event include:

The tournament is hosted at the North Shore Events Centre, with an official opening at SKYCITY on Monday July 31st.Qualifying for all events takes place on Tuesday (along with the men’s singles first round matches).

The quality of the entry list means that the majority of the 64 New Zealanders will play in qualifying as they look to earn a place in the main draw and with it, gain vital international experience.

The tournament builds to a conclusion with live television across the Saturday and Sunday, with all matches hosted at the North Shore Events Centre. Tickets are on sale now and with the quality of the field and the attraction of Lee Chong Wei, Carrel expects demand to be high.

If any Association has event staff or volunteers who wish to be involved in the event as a Volunteer, to see how a major international event operates, we would be pleased to include them.  They will need to be available for the duration of the event, including Monday 31st July which is practise day and the final set-up and an opening function, before play starts Tuesday morning.  If from out of town, they will need to meet their accommodation and travel costs – we do have some special hotel tournament rates which we can advise